First – a disclaimer: My family and I live on the Conway Chain, so if I sound at all biased…it’s because I am. It is arguably one of the most family-friendly lakes in Orlando, and we love it. You’ve been warned. Ha!

The Conway Chain is comprised of Lake Gatlin, Lake Conway, Big Lake Conway, and a number of canals along the way. These are what I’ll call the “official” names, but locals will often use terms like Middle Conway, South Lake Conway, and Little Lake Conway when discussing what are essentially four different pools of the two main Conway lakes. The aerial photo to the right clearly shows the four pools of the larger Conway Lakes, and if you study it you’ll see the smaller Lake Gatlin to the northwest.

The incorporated towns of Edgewood and Belle Isle encompass many of the lakefront homes on the Lake Conway Chain of Lakes. Both are small municipalities with dedicated police forces, but many other services are shared with the City of Orlando and Orange County.

Locals share stories of the original homesteads along Lake Conway and Lake Gatlin, many of which were set up as fish camps back in the early 1900s. Due in part to the concerted efforts of owners and civic leaders over the years, the Conway Lakes have, for the most part, remained extremely healthy, and its clear green waters remain one of the top fishing spots in the area. The lakes support a healthy fishery of largemouth bass, crappie, bream, catfish and even the occasional chain pickerel. You may also see what appear to be tailing reds along the shorelines on some mornings, but these are just some of the grass carp that have been placed in the lakes from previous hydrilla management efforts from years past.

I’ve found some holes in these lakes that are over 30’ in depth (which is relatively deep for a Central Florida lake), and the variety of bottom contours and aquatic plants make for some fantastic fishing almost year round. The Lake Conway Chain is famous among anglers for its schools of shad that congregate from late winter through early / mid spring, and many fisherman will cast net for the shad and fish live baits, catching what are typically large quantities of smaller bass (“schoolies”). Artificial surface baits that seem to do quite well are a Zara Spook, Dalton Special, and a Chug Bug. Small divers like a Rapala’s Shad Rap and a Rattle Trap have also produced for me on days of temperature extremes in the deep waters. And, of course, the good ol’ rubber worm and various crankbaits tend to be pretty reliable as well. All in all, the fishing is outstanding.

The lakes of the Conway Chain are some of the best in Orlando for watersports. Because the lakes are large and deep, and the canals that interconnect the lakes are well-maintained and navigable year round, you can almost always find good water for whatever type of activity you seek. Wakeboards, water skates, skis, and myriad of tube devices are a popular site being pulled behind boats and personal watercrafts of all shapes and sizes.

Additionally, these lakes tend to be a great social scene. Barbecues, dock parties, bonfires and sunset cruises are the norm along the white sandy shores of the Lake Conway Chain. The annual Christmas light parade is unlike anything you’ve ever seen, and the sandbar on the north lobe of the South Lake is always a good spot to tie up and relax with your favorite cold beverage while you catch up with neighbors. 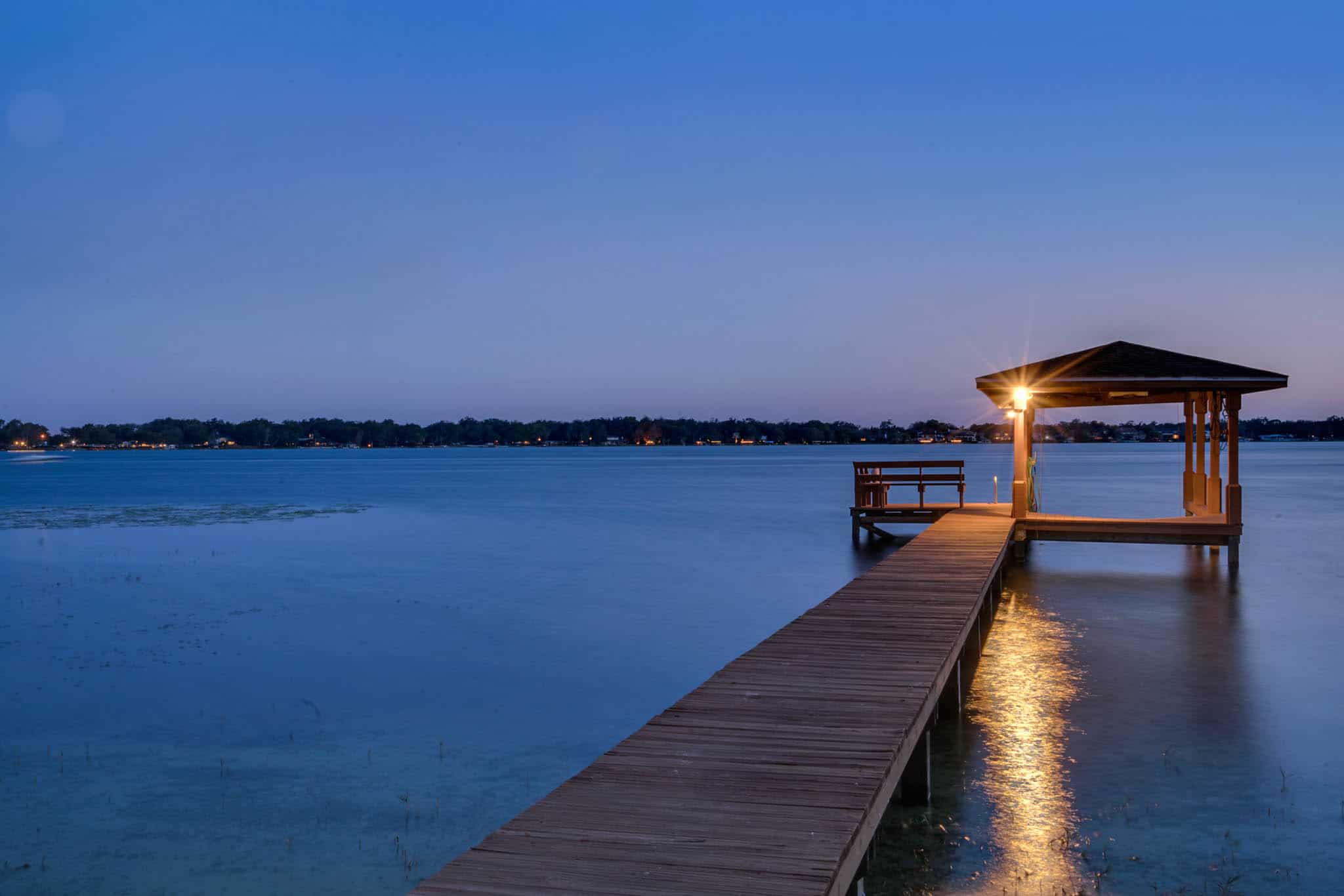 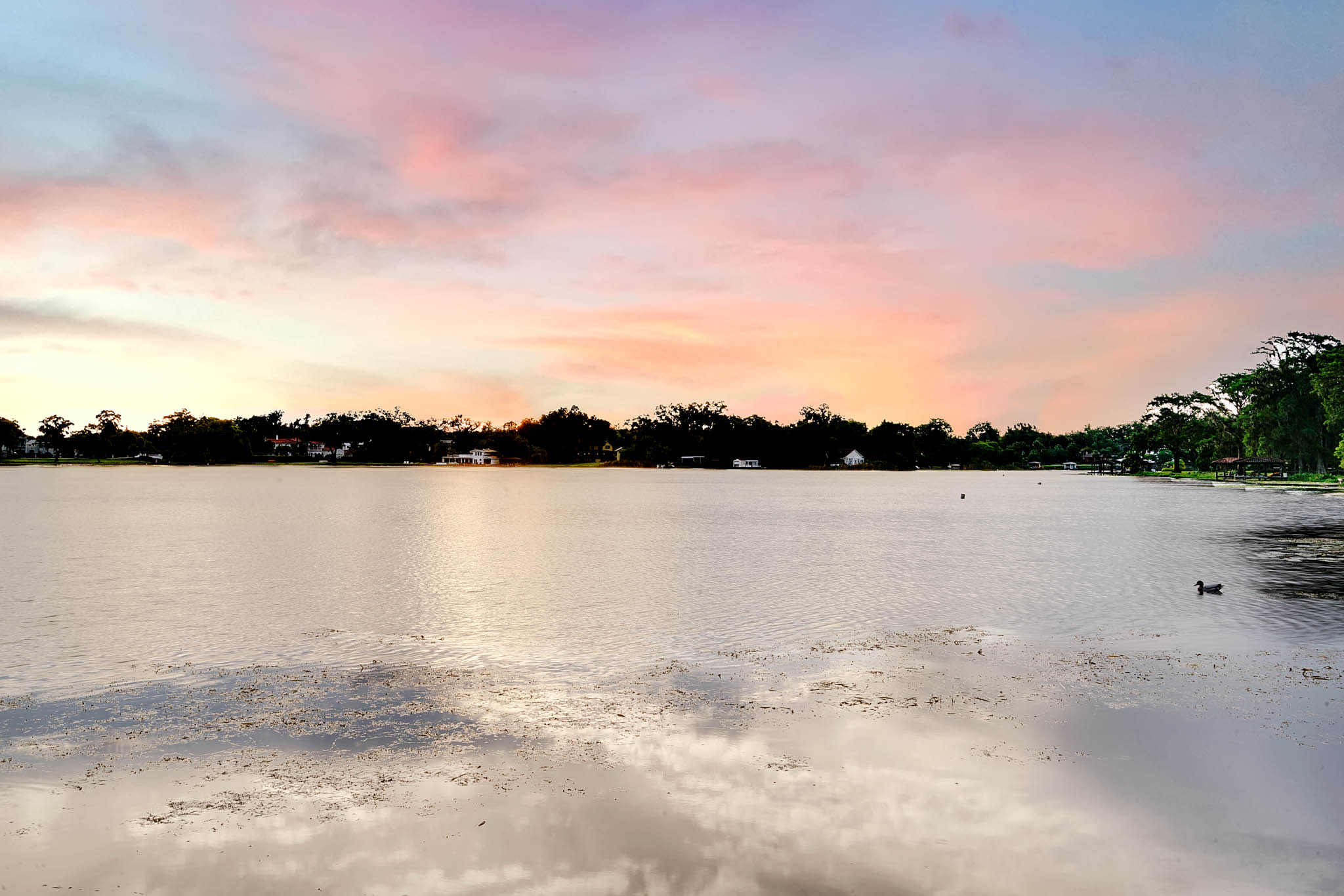 The lakes of the Conway Chain combine to cover more than 1800 acres of surface area. This beautiful body of water is characterized by typically clear, green waters and hard, sandy bottom. I have been on the lake at days where water clarity exceeded 25 feet. It is truly amazing!

The Conway Chain commonly refers to Lake Conway, divided into East, West, Middle, and South pools, and Lake Gatlin. Lake Gatlin is the smallest, measuring at about 64 acres. It also tends to be the deepest, with some holes close to 30’ deep. Lake Gatlin is what I would characterize as a “smallish” ski lake, and once several boats are out it is probably best to move over to one of the larger lakes. The canals connecting all of the lakes are managed by the Conway Navigational Board, which is volunteer board through Orange County that assists in the allocation of funds and resources for management of the Lake Conway Chain waters.

These lakes boast some of the finest lakefront properties in the Orlando area, and there is a high level of community involvement in protecting these beautiful lakes. Most of the Lake Conway waterfront owners tend to be environmentally aware of the impact they can have on water quality.

Public access to the lakes is available at the Randolph Street Boat Ramp into Middle Lake Conway off Hoffner Avenue, two blocks east of Orange Avenue. The ramp is maintained by the Orange County Division of Parks and Recreation and sits next to a small park with a dock that makes for good bank fishing. The cities of Edgewood and Belle Isle also maintain several smaller parks with ramp access into other areas of Middle Lake Conway and Lower Lake Conway.

View Conway Chain of Lakes in a larger map.

The neighborhoods surrounding the Conway Chain of Lakes offer several school options, both public and private. The elementary schools are Pine Castle, Shenandoah, Pershing, and the newly opened Cornerstone Charter School for K – 12. Middle school zones are Conway, Walker, and Memorial. All high school students will attend either Boone High School or Oak Ridge High School. Oak Ridge High has had challenges in recent years, and this was one of the leading factors behind the efforts to start up the Cornerstone Charter that pulls primarily from the Belle Isle and Edgewood neighborhoods. There are also a lot of families on the lakes whose children attend private schools such as Lake Highland Prep, The First Academy (TFA), Pine Castle Christian Academy, and Bishop Moore Catholic High School, among others.

Mike and Monica and their team are outstanding, dependable, honest and honorable. There is a chance he is part magicia and as well, because no one expected our house to sell so quickly or for the price we wanted!

Monica helped us find the perfect lakefront estate and was amazing in helping us negotiate a deal we felt was fair for all parties.  We highly recommend Derenthal-Cook.

Without hesitation, I can refer Mike as a true professional who will make the sale of your home his top priority.

If you want someone you can trust and who will tell it to you straight, yet is also totally sympathetic to your concerns, give Mike a call.

I can say with full confidence that Mike would treat anyone as well as he has me and my family.

Enter your email to receive periodic updates about the lakefront market, or click here to contact us with questions about buying / selling lakefront homes.
Fill out my online form.